You can connect the RPI and Arduino is several ways, eg. Serial/UART, I2C or USB. With I2C you can connect several device on the same wire. 1:1 communication is now suffiecient so I will go for the Serial/UART connection.

The RPI operates at 3.3V and the arduino I have chosen on 5V. Therefor we should use a Logic Level Converter (LLC) for serial/UART communication. If you are going for I2C please use the I2C converter.

There are 12 total pins on the LLC – two parallel rows of six headers. One row contains all of the high voltage (e.g. 5V) inputs and outputs, the other row has all things low voltage (e.g. 3.3V). 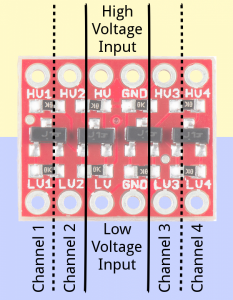 There are four separate data channels on the BD-LLC, each capable of shifting data to and from high and low voltages. These pins are labeled HV1, LV1, HV2, LV2, HV3, LV3, HV4, and LV4. The number at the end of each label designates the channel of the pin, and the HV or LV prefix determines whether it’s on the high or low side of the channel. 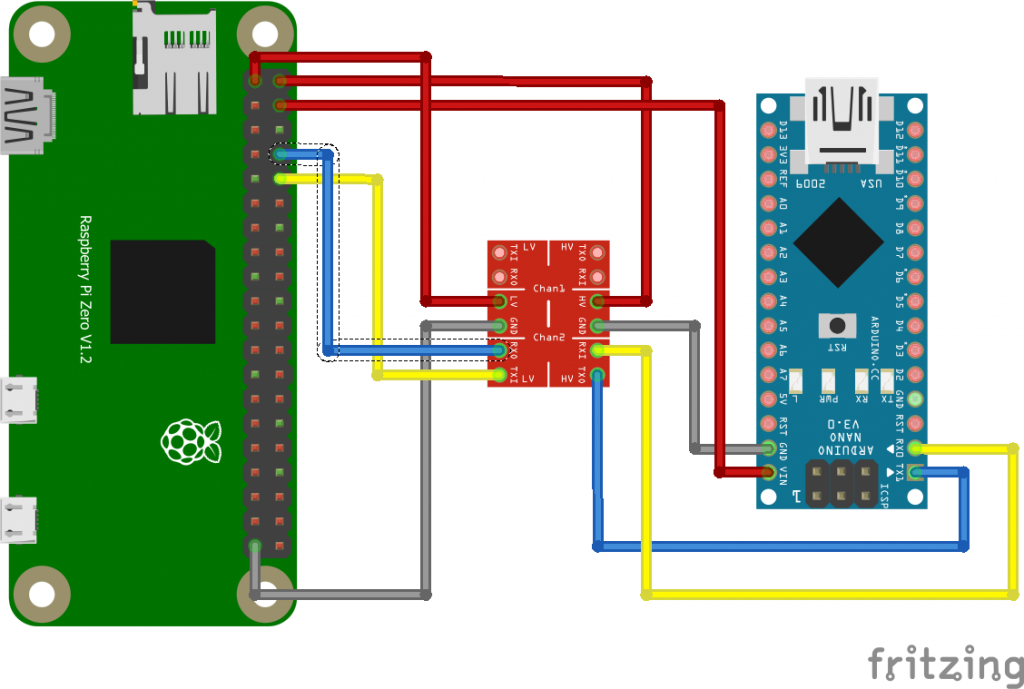 The RPI is the low level side and the Arduino on the high level side. Please note that for the GPIO the RPI uses 3.3V, but still it has pins to provide 5V. I use the RPI 5V pins to provide power to the Arduino Nano board. We can also use the other RPI 5V pin to provide the HV side for the Arduino. We also need to twist the TX/RX, check this cross on the LLC board (blue/yellow crossing).

RPI config
The RPI is not yet configured to use the serial for communication. Please perform the following steps:
You can use “raspi-config” utility to enable the UART:
1. sudo raspi-config
2. Under “Interfacing Options”, choose “Serial”.
3. Say “No” when it asks if you want a login shell over serial.
4. Say “Yes” when asked if you want the hardware enabled.
5. Finish, then accept the offer to reboot.

After this configuration change and the wiring you are ready to check if the serial communication is ready to use. First you can check if ttyS0 is available on the RPI side with the command ls -l /dev/ttyS0, you should see the following output: crw-rw—- 1 root dialout 4, 64 Mar 22 19:16 /dev/ttyS0

The fastest way to check the communication is to load the following program into your arduino:

This arduino program will print out a list of dec, hex and binair numbers on the serial interface of the arduino.

In this tutorial we will dive into the use of MQTT with the arduino yun (or linkit) to control the LED#13.

One of the common protocols used in the IOT world is MQTT. MQTT is a machine-to-machine (M2M)/”Internet of Things” connectivity protocol. It was designed as an extremely lightweight publish/subscribe messaging transport. It is useful for connections with remote locations where a small code footprint is required and/or network bandwidth is available.

The setup
1.) MQTT broker running on a RPI
2.) Python script on the arduino yun (openwrt)
3.) Sketch for the MCU

To test it open two SSH connections. One for subscribing and the other for publishing.

For debugging purposes you can also run mosquitto in a shell. So open up the third SSH connection. Execute “/etc/init.d/mosquitto stop” and then execute “mosquitto”. Output:

And then use the following python code:

Normally I would use value.put() instead of using json.send() only I received a “Bad file descriptor” once in a while. As the arduino yun uses JSON via TCP to the bridge library I used this workaround instead.

Sketch
Upload the sketch. memset will set al the items in the array to zero.

Please note that the delay for retreiving info from the bridge is rather low, causing heavy load on the linux side.

def on_connect(client, userdata, rc):
print(“Connected with result code “+str(rc))
# Subscribing in on_connect() means that if we lose the connection and
# reconnect then subscriptions will be renewed.
client.subscribe(“arduino/led”)

Should be changed to:
def on_connect(self, client, userdata, rc):
print(“Connected with result code “+str(rc))
# Subscribing in on_connect() means that if we lose the connection and
# reconnect then subscriptions will be renewed.
self.subscribe(“arduino/led”)

The Yún has two processors on board. One is an ATmega32U4 like on the Arduino Leonardo (we call it MCU from now on). The other is an Atheros 9331 (we call it MPU from now on), running Linux and the OpenWRT wireless stack, which enables the board to connect to WiFi and Ethernet networks. This tutorial also works for the linkit 7688 Duo. To run it on a linkit, please enable the arduino yun bridge software. You can find it in my older posts.

The bridge has quite some options available, for me there are two use case who are practical for me:
1.) Sending sensor data from the MCU to a server
2.) Bi-directional communication between a server and the MCU

Sending sensor data from the MCU to a server
Say for example that you have a sensor which can measure the temperature and partical concentration and you want to upload it to a restfull api webserver. In this case you are only sending data from the MCU to a server. Easiest solution is to use the “runShellCommand”. As the functionname tells us, it runs a command in the shell.

Now we have a solution to run from your sketch a shell command. Now we have access to the shell, we need a tool to upload our data to the server. We can use Curl for this. Curl is an open source command line tool and library for transferring data with URL syntax. Eg. you can download a webpage, or upload via json data to a restfull api.

You need to include

Sketch
The put() function allows you to store data on the MPU using a Key/Value structure. The Key field is like a label and you can associate a value to it. The key name must be unique in order to identify the correct value. On the MPU side there is a data store where all the keys and the values are saved.

get() allows you to read a key/value item previously saved on the MPU. You can request for a value stored in the datastore by passing get() the Key you want to search for, the support buffer, and its size. The Key is similar to a label, used to identify an associated value. The key name must be unique in order to identify the correct value.

Python script
For the MPU I’ve chosen to use a python script. You need to import the bridge library. The code is rather self explaining. You can also access the data via the API of the arduino Yun. In our case you can use http://192.168.x.xx/data/get/counter to read the value of counter, or write to counter via http://192.168.x.xx/data/put/counter/4

The sketch code is based on code from Jan-Piet Mens. The python from alnitak1000. I combined both the bridge.put()/bridge.get() and value.put()/value.get() together.

Most of the pin layout of the Linkit 7688 Duo is quite straitghtforward. But for I2C communication I needed this info. Please find below the layout.

If you already have code written for your Arduino yun which uses the Yun bridge and you want to run it on your Linkit 7688 Duo you can also enable this library.

In your sketch you can now add Bridge.begin(); in the setup which will trigger the run-bridge shell script which invokes python bridge.py from /usr/lib/python2.7/bridge.

Both the Linkit 7688 and DHT22 are low cost components and can perfectly be used as a IOT temperature and humidity device. Using the openwrt part of the linkit to upload all the data to your server.

The DHT22 has has four pins

You can ignore pin 3, its not used. Please use a pull-up resistor between VCC and the data pin (10k).

Below pictures shows the connection diagram.

Now we need to install the DHT library. You can find the latest libraries here: https://github.com/adafruit/DHT-sensor-library

You can use the following sourcecode written by layada. If you download the libraries you can also get the code from the example menu.

With the arduino ide 1.6.9 you will receive a compile error “magic key not defined”. You can download and use the hourly builds to solve this issue.

After unpacking the Linkit Smart 7688 and power it up I did not get any Wifi network.

Normal behaviour: After the boot loader has initialized the boot up process begins, which takes about 30 seconds. Next, the Wi-Fi LED turns off; this means the system is ready to accept a Wi-Fi connection. The 7688 becomes an access point (AP) based on his mac address (LinkIt_Smart_7688_XXXXXX, where xxxx is the mac address)

Unfortunately I did not see any SSID broadcasted. To solve this please do a factory reset using the Wifi button (middle button).

Now you can connect to the board. 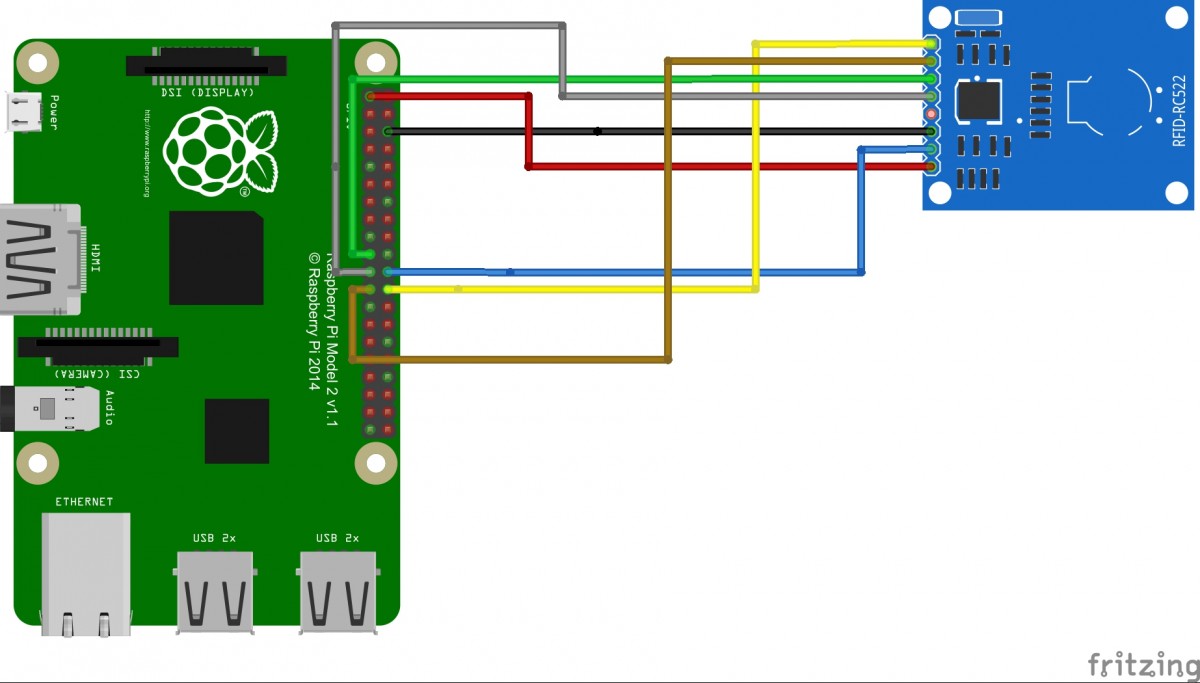 The RC522 is a cheap RFID module that can read and write Mifare’s tags and being sold at several web stores, like eBay and included with many “starter kits” nowadays. Simply search RFID-RC522 (MF-RC522). The card reader and the tags communicate using a 13.56MHz electromagnetic field. (ISO 14443A standart tags)

Below table shows the connection between RC522 and RPi2:

We need to enable all the python libraries and the SPI interface on the RPi2 to get it working.

To install the python environment:

To check if the SPI interface is working, please reboot the RPi and run the following instructions: